The number of ecommerce startups popping up around Korea has increased significantly in the past year, with sites selling a wide range of items ranging from kids clothing to brand name items. Memebox is one ecommerce startup which has been gaining traction with its boxes of beauty sets which let consumers sample various cosmetic products. Despite being self-funded, the company brought in revenue of US$1 million in 2012 and its ecommerce model has been growing at a rate of 200% per month.

Every month Memebox sends out its “mystery” boxes of beauty products to subscribers which include lotions, creams, cleansers and many other items. Priced at only 16,500 won per month, each box contains a selection of 5-10 samples from various brands. While the term “sample” may conjure up images of small one-use packets given out with products bought directly at stores, Memebox offers miniature versions of full products that can be used for much longer than a typical one-use sample. Some full-sized products are also included and each box has a total value exceeding 100,000 won.

Cosmetics companies offer their products for free, which significantly lowers costs for the startup, the boxes acting as an effective business marketing channel to Memebox’s 60,000 members. Ultimately, the value that both the customer and the brands get out of the boxes makes for a win-win situation. Though primarily aimed at women, other boxes for men and babies are also available and a special theme is chosen for every month. 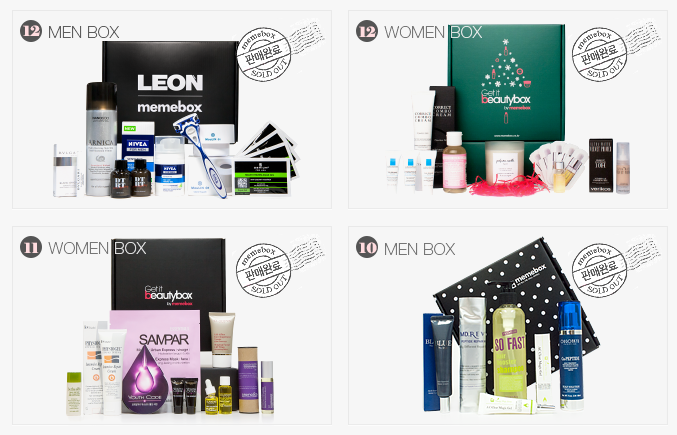 Products from previous boxes can bought through Memebox’s ecommerce website.

The company is now focusing on its ecommerce service which was launched in August last year. Differing from its subscription service, users can select full-sized items for purchase, including items that were in the previous month’s box. Blogs are also a major part of the company’s marketing strategy, with over 1000 bloggers partnering up to review products. With Korea’s high concentration of bloggers, CEO Dino Ha says he is fortunate that Koreans are so into cosmetics.

“South Korea is the number one spender for cosmetics. It’s a much smaller market than the US but per person, Koreans spend the most money on them. We’re lucky that we don’t have the big ecommerce players from the US, so we do think that there is a niche market for a commerce model like Memebox.”

Memebox was originally founded in December 2011 by three friends including Ha, who had previously worked at Ticket Monster and also studied fashion in New York. The team managed to get the subscription service up and running in just 68 days, but not without all three founders running around Seoul approaching hundreds of brands first. Ha says that initially they made pitches to 200 companies but only found success with five.

Nevertheless the boxes were a hit from the start and the first 200 sold out quickly. That number increased to 500 the following month, and further to 5000 boxes after that. Now the company sends out 15,000 “women boxes” a month and has partnered with 189 brands including international names such as Bvlgari, L’Oréal Paris, Nivea for Men, and Shick. Nevertheless, Ha says that there is still a long way to go.

“We have 189 partner brands but there are about 1600 brands in Korea. Now we have a waiting list for brands, but not all of them are top quality brands. Our sales teams are working everyday to get better brands for our boxes.”

A major boost for the company was the sealing of a partnership with Korean conglomerate CJ and its popular fashion channel OnStyle. The revenue sharing deal saw its boxes and the contents of them featured every month on the ‘Get it beauty’ show, a beauty-focused program on the channel. The first broadcast in October resulted in 8000 new members signing up for the service, a huge increase compared to previous counts. Ha said that it shows the power that television still holds in the Korean market.

“We tried many things previously. Magazine editorials and ads, newspaper ads, SEO marketing, but this has been the most influential marketing tool. Since it’s a beauty program they had our potential customers there. I think TV still has the most impact.”

The next immediate step for Memebox is to continue improving the quality of its boxes and taking the service mobile —with an app planned for release in February this year. Ha says that long term he would like to expand the company globally, targeting the East Asian market, and has already had requests from companies overseas that are interested in Korean cosmetic products.

Memebox recently joined SparkLabs, an accelerator which aims to grow Korean startups with the help of a wide network of mentors including experienced entrepreneurs from Silicon Valley and around the world.