Ultra Caption is now serving a smartphone application ‘YourFriends’, which was originated from a TV program called ‘Your Ideal Type World cup’ a few years ago in Korea. We personally heard their stories as well as their exciting projects.

It is hardly possible to forget the company’s name once you hear it, what made you name your company ‘Ultra Caption’?

Kwon: First of all, it sounds funny, isn’t it? Pursuing fun like this is our philosophy. But we now have some issues while we are preparing for global business- the name ‘Ultra Caption’ does not sound as funny in English as it does in Korean. If we set up the US subsidiary, we are thinking about using ‘Ultra Interactive’ instead, however this still does not revive the unique nuance of the original ‘Ultra Caption’, so now we are considering what to do.

One of decriptions people make of the CEO is ‘a CEO who has a deep understanding of developers’. I think this is because he used to work with great engineers and developers since the launching of Qbox in the US, Eventhough he does not have any engineering background, and likewise the proportion of developers in Ultra Caption is relatively higher than other start-ups, so what do you think the reason is?

Kwon: I think I’m rather lucky. All 9 developers, other than me, know each other very well since they are all from the same circle, Waffle Studio, that made a voluntary course evalation service ‘SNU EV’ at Seoul National University.

Kim: We’ve been very close to each other because of the circle. While some of them wanted to do something fun for work, they met Mr.Kwon and joined Ultra Caption, and they made the referrals of the others, resulting in the total 9 developers at the end. This is how we work in a friendly and relaxed environment now.

The working environment seems to be very flexible here. There is no fixed working hours, so I heard that some people work even at night there, I wonder whether this brings any problem with about 20 members now. Other than this, is there any Ultra Caption specific culture?

Hwang: I come to the office sometimes at 4am and sometimes at 10pm. Of course, occasionally we also feel that it is hard to schedule a meeting with this flexibility and few members still in school. But we are always online to have realtime communication, and we all accept this for our happiness and welfare.

Lee: There are pros and cons between that people all give opinions and that few people dominate the discussions. For us, we think it is very important to have a process in which  we all give opinions and coordinate them, so it takes longer to reach the final conclusion. This, however, has a definite advantage because we work on projects faster and more actively once the conclusion is made by all of us.

Kwon: This is a social network dating application based on people’s faces. This is a tournament type match and you start with 16 potential date partners, and choose one person who you think is closer to your ideal type between two persons per round, to reach to the final. At the final you make your choice and ‘like’ him or her to ask for a conversation. If he or she accepts it, you can start the conversation.

Kim: When we first thought about this service, we tried to use our friends’ faces on Facebook, but we changed it to what it looks today as people are more interested in gaming with the whole applicatin users. In order to reduce the playing time, we changed the process from top 16 to top 8, and medals are awarded to the top 4 and people can see who gave medals to who. Through ‘Image Feedback’, people can give feedbacks like ‘friendly or smart‘ to each other, so this service will probably encourage people to support each other.

The number of Image Feedback done in YourFriends exceeded 170 million. It seems that YourFrriends now represents Ultra Caption, what do you think the reason is?

Kwon: Above all, because it is funny. Other similar dating applications provide limited functions, whereas we meet the needs that people want to meet new people by playing casual game aspects. A user stays 13 minutes once connected, and visits 3 times a day on average, meaning that the customer loyalty is fairly high as s/he spends 33 minutes per day within our application.

Lee: Normally people need motivation to do something. For example people do something for money, reputation or just fun, and in our case, we work for fun and it is our strength. It is the ‘gamification’ on our products that made YourFriends so successful. Since people who pursue fun get together, we have experience and are confident in creating products or services that entertain users.

What achievement are you trying to get in the US from the Global Nomad program?

Kwon: We are trying to promote our company and brand before we initiate a real business in the US. We got investments last year and trying to get the series B this year. We want to promote to potential investors how fun we and our business are and how we are providing a valuable business in Asia. We recently launched our YourFriends business in Taiwan, and the reaction of the market was fairly good.

Abel: This opportunity is pretty important for us, not only because we try to expose ourselves to the investors interested in Asian market as we are currently targeting it, but also because we will enter the US market in the long run. We think that there should be strong needs among teenagers for a tool or platform to get connected with others as Snapchat became so popular. It is human being’s basic instinct to get connected with other people in some way or other, so this is why and how YourFriends can be successful in the US. 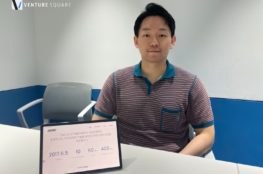