According to research, 86% of citizens who were asked if they use social networks while watching TV said that they did. Teletalkvi is a service and also the name of a company that aims to help users accomplish this habit better. Despite the company having launched the service on Google Play in October 2012 without any promotion, the app was downloaded 1200 times and 5000 chatting rooms were created through the service. Seeing potential in the Teletalkvi, Korean business incubator Primer invested 20 million won in the company and has also received government support from the Ministry of Science, ICT & Future Planning — being selected as “Creative Challenge Software”. Through investment and support, Teletalkvi has managed to raise a total of 70 million won.

Teletalkvi launched its official app in June this year and lets users share their opinions and feelings about TV programs in real time. The service is simple; the app displays real-time TV programs which can be chosen from a “TV Guide” interface. Users can chat while watching programs in another window, with message boards used when a program isn’t playing. SBS, one of the biggest broadcasting companies in Korea also has a similar service called “Soty” but is limited to SBS programs and there is no real-time chat function. Catch TV and Getglue are existing services but also lack some parts. Catch TV is drama focused and Getglue doesn’t provide Korean broadcasting — though it is the biggest social TV service in the US. Teletalkvi’s most significant difference from these services is the strong communication function it has. Teletalkvi is currently facing a new issue for its business; the website. It launched its website to support the app but it is now visited and used by more people than the app. The company then decided to focus its efforts on its web service and Facebook page, using the app as more of a  chatting tool. Teletalkvi’s goal is to be the number one social TV channel in Korea and connect the service to online commerce site which allow people to purchase products related to, or appear on TV programs. The company also expects to build database of users’ emotions for marketing purposes. “The market is in its early stages, but demand clearly exists. We expect to be the number one competitor by rounding up 100,000 users. Looking long term, we want to develop the service as a hub of content and communication with various video programs and information.” said Dongjun Seo, CEO of Teletalkvi. 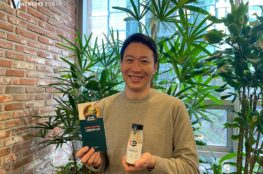