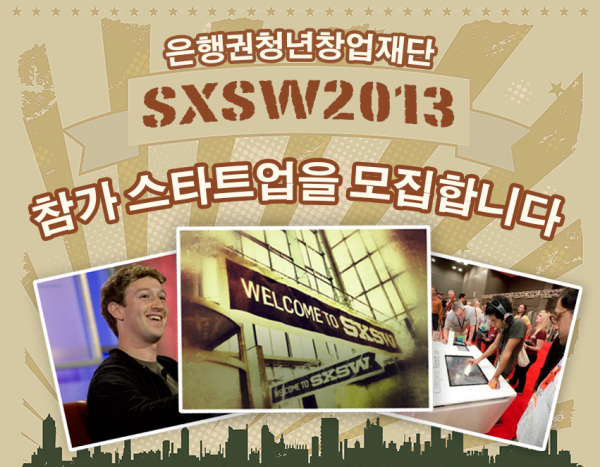 The Banks Foundation for Young Entrepreneurs is searching for startups to take part in the world’s largest creative industry conference ‘SXSW 2013’ in March next year.

The foundation is preparing a Korean Startup Pavilion showcasing the nation’s most promising startup technologies and services at the main trade show event. Participating companies will be chosen through screening of applications and interviews, and those selected will be supported with full conference and accommodation costs. This will be the first time that Korean ventures have officially taken part in the event.

SXSW “South by Southwest” is an annual US music, film, and interactive conference held every year in March in Austin, Texas. The festival first began in 1987 as an event for music and movies, and was later expanded to include the digital industry. It is now considered one of the most successful festivals in the world and many leading mobile services inlcuding Twitter, Foursquare, Pinterest have all passed through the event on their way to becoming stars.

The trade show is a highlight of the festival and attended by around 600 companies and 65,500 investors and media every year. Other countries including England, Brazil, Australia, Taiwan and Japan also showcase their startups, with Singapore to join next year.

The Banks Foundation for Young Entrepreneurs is a non-profit organization that was established by 20 members of the Bankers Association in May to help build the entrepreneurial ecosystem and support young entrepreneurs.