2015 looks to be a huge year for the new wave of Korean startups. Here are several of the reasons why.

Young entrepreneurs in Korea are founding Asia’s most dynamic startups. In the past, many young Korean innovators who earned advanced degrees outside of Korea came back home to pursue careers with conglomerates like Samsung, LG, and Hyundai. The recent trend, however, sees more young entrepreneurs taking risks to start companies of their own with global ambitions. These entrepreneurs team up with local talent and march forward to build things for the global market.

South Korea ranked first in Bloomberg’s Global Innovation Index. The country has the highest broadband penetration in the world at 97 percent and is a leader in broadband speed with an average peak connection of close to 50 megabits per second.

In Korea in years past, Korean investors weren’t willing to invest in startups or they wanted collateral from the companies in exchange for their investment. But going into 2015, more local VCs and angel investors are looking to take on risk and are actively hunting for promising startups. Local accelerators offer attractive packages that include capital, mentoring, and networking that startups need to expand to global markets.

Korean startups are getting more attention from Silicon Valley giants. Next year, Google is opening a 20,000-square-foot startup center in Gangnam to nurture domestic startups and give them mentorship and global exposure.

The South Korean government, eager to help nurture an economy that relies less on its conglomerates, has begun to invest in the startups in the future. Korean startups are getting more help from government programs that match private investments with public grants.

In 2013, Korea launched the new Ministry of Science, ICT and Future Planning under the slogan of “Creative Economy”. In 2014, the ministry’s budget increased to over $12 billion. Over two billion of this budget went directly into fostering growth for the startup ecosystem. Since that, the tides are shifting rapidly to promote entrepreneurship. The Korean government’s immense support of startups through venture capital infusion, as well as the tireless efforts of many organizations and individuals in startup ecosystem, has led to a startup boom that I believe will continue into the future.

Lastly, Gangnam is more than Psy’s playground – it is also a bustling geography for tech startups. Venture capitalists from Silicon Valley and Japan are opening offices in the area to find promising Korean startups to invest in. Silicon Valley is not the only place that you can find startup networking events or education programs; Gangnam is now competing with Silicon Valley as a core startup hub with diversity, rich culture, and tech geeks. Additionally, many of Gangnam’s startups and venture capitalists are located along Teheran Road in Gangnam increasingly referred to as Asia’s Silicon Valley. 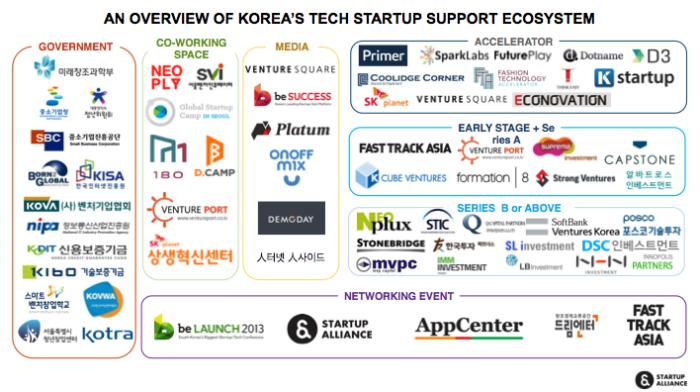 It’s the right time for Korea to prepare for a post-Samsung economy, one that may come earlier than expected. 2015 looks to be the year that Korea moves beyond an economy dominated by conglomerates and starts build a thriving startup ecosystem.

Will Korea be the world’s new startup powerhouse? I believe we will find out in 2015.