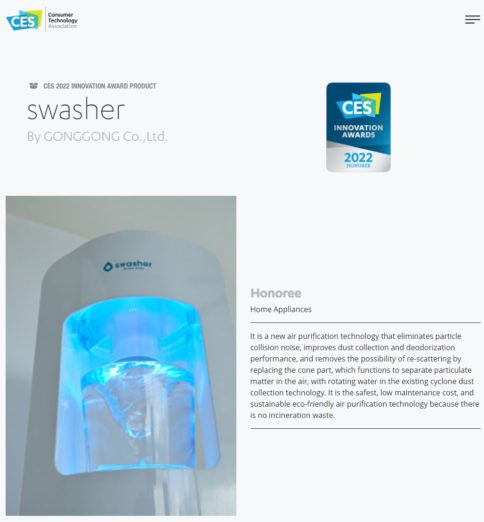 The next-generation air purifier Swasher developed by Gonggong Co., Ltd. won the ‘CES Innovation Award’ ahead of ‘CES 2022’, the world’s largest home appliance/IT exhibition to be held in January 2022.

The award-winning Swasher is characterized by using a water vortex as a filter instead of the HEPA filter of a general air purifier.

It is a next-generation air purifier with innovative new technology that can avoid the vicious cycle of resource consumption, waste generation, and environmental pollution caused by the use of replaceable filters. By maximizing the contact area between air and water per unit time, it reduces noise, runs on low power, and removes harmful gases. The electricity consumption is low as the maximum use is 9Wh per hour, and when operated 24 hours a day, the monthly electricity bill is 45 won, which is one-third of that of a general air purifier.

Seon-eon Lee, CEO of Gonggong Co., Ltd. said, “I am very honored to receive the Innovation Award at CES2022. We will continue to present new air management solutions with our own eco-friendly innovative technology in line with the advent of zero carbon emission era. We will also lead the eco-high-tech trend and introduce a ‘safe and sustainable’ next-generation air purifier.”

The following year, it won first place at the 2nd Startup Demo Day at the Youth Startup Academy, and was awarded the Grand Prize in Korea’s Excellent Patent competition in the field of ‘living/air purifier’.

In June, it was selected for the private investment-led technology start-up support (TIPS) program and attracted research funds of up to KRW 1 billion through government support and investment that will be provided over two years. Also, at the end of the year 2021, the company is preparing a special live commerce session with the Youth Entrepreneurship Academy in cooperation with Public Home Shopping.

Gonggong Co., Ltd was also selected as a final participant of CES 2022 Korea Pavilion, the world’s largest IT product fair to be held in Las Vegas, USA for four days from January 5 to 8, and was assigned a booth in Eureka Park. The company plans to utilize the chance to create global business opportunities.