Jung Sae Ju, CEO of Noom, participated as a keynote speaker in the digital healthcare sector in COMEUP 2020 launched at Ilsan CJ Studio on the 19th. The keynote session began with the topic of “The Behavior Change Revolution” on how Noom, a healthcare service, with the slogan of “a diet app that changes your every day,” has led its business.

In order to introduce Noom’s service, CEO Jung Sae Ju describes he should introduce some keywords in his own life. That is because the service started with an inspiration from Jung’s critical life moment

The first keyword was Yeosu. He was born and raised in Yeosu. He was curious about the world around him as he grew up in a small city. Second, heavy metal music. He was a boy who loved music, and he began his first business at a young age as a heavy metal label business. He said he found out what a startup is and what entrepreneurial spirit is through his heavy metal business. The third keyword was father. Although his father was a doctor, Jung described that he passed away from cancer. Because of his father’s influence, Jung developed a will to start a business for health and medical care. Therefore, the curious boy in a small city started a health-related business based on the entrepreneurial spirit he gained through his music business. The business is now called Noom.

Today, Noom is evaluated as an app that uses the consumer’s psychological state and technology to change the lifestyle behavior of the consumers who wish to lose weight. The most difficult thing for those who are losing weight is the yo-yo effect, a phenomenon in which the weight loss in a hard way is gained again and again after the end of the diet period. Noom thoroughly encourages the minds of the consumers to prevent such a yo-yo effect, and it provides health habits tailored to the user’s style to change the lifestyle itself. It is likely that the consumers will experience a yo-yo effect following the diet period because the weight was lost by changing lifestyle.

Although it is very different today, Jung described that he did not provide such service from the very beginning. Initially, Noom’s service focused on calorie counting, but as it began to realize that although calories are important, comprehensive healthcare is critical. Thus, the service continued to expand. In addition to managing eating habits, diet, and diet emotions, Noom is also providing services to resolve hypertension and diabetes, which are deeply related to weight loss. 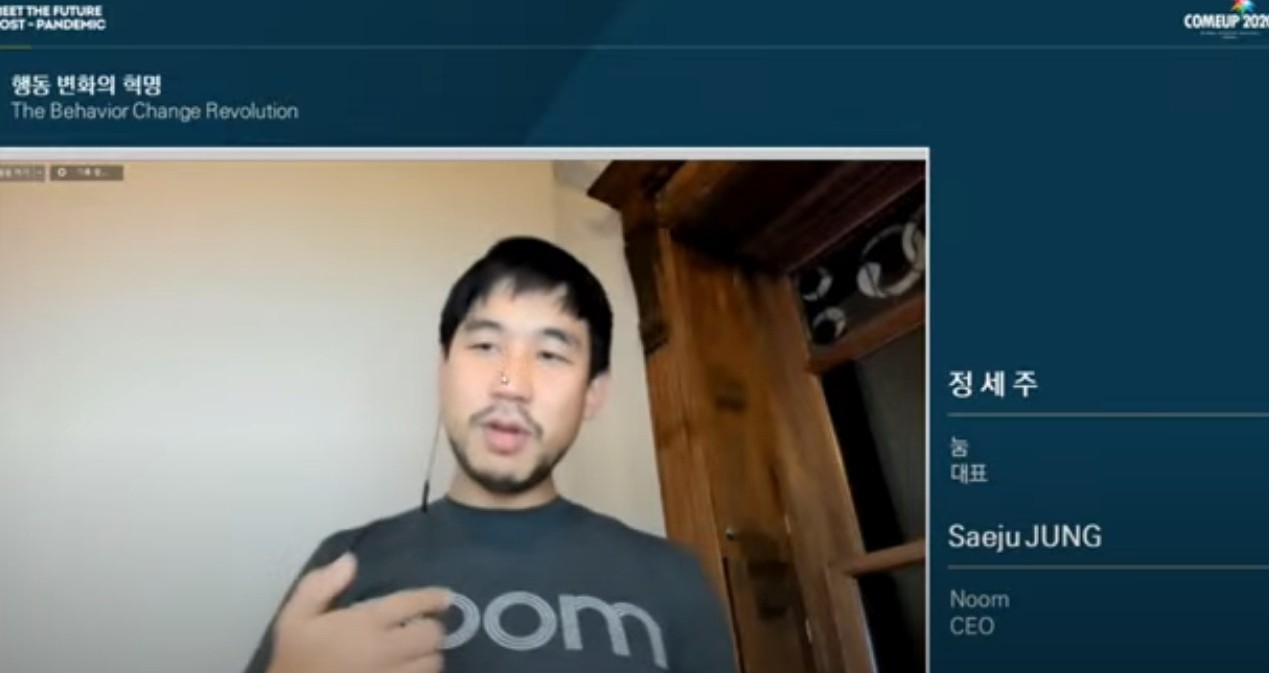 So how does Noom change people’s actions? CEO Jung Sae Ju described that a service that adds AI technology to human emotions is key. He said that because healthcare requires thorough monitoring around the clock, computers are more appropriate than humans. However, he added, “the emotional support provided by humans is at a level that AI cannot reach.” In other words, Noom’s key to success was utilizing AI but adding human sentiment.

The users who share an emotional exchange with the service continue to use Noom. This is the reason why Noom could create a sustainable and healthy lifestyle while many healthcare services provide a single-use program. Likewise, since the COVID-19 outbreak, the number of Noom users increased sharply. Jung said that many deaths have unfortunately occurred due to COVID-19 and that the mortality rate mainly increased due to the outbreak of the underlying disease. In other words, lifestyles have affected the mortality rate. Likewise, Jung explained that the acceleration of home training trends due to social distancing has also had a positive effect on Noom.

While saying that the awareness of health and wellness that has once been created will not disappear even following the coronavirus, Jung predicted that various fields such as telemedicine and remote coaching services will grow rapidly in the future.